Hello, welcome to Good Reads where I look into what makes the screenplay winners Oscar worthy. We’ve already discussed the winners of 2014 and 2013, now it’s Tarantino and Terrio’s turn. Next week we’ll look into Midnight In Paris and The Descendants, a rare year which doesn’t include the Best Picture winner (unfortunately). Quentin Tarantino has a mountain of passion projects. That mountain is a pile of dead bodies soaked in buckets of blood. With signs that he’s dipping back into Westerns he may have delivered us his finest goods with sprawling genre movies Inglourious Basterds and Django Unchained. His second Oscar feels like a second peak career award, but a deserved one at least.

While drenched in overt homage, Django’s greatest strength is its subversive characters and situations. Django himself is in a position that we’ve never seen a character in before. And Dr. King Schultz – a German Bounty Hunter Dentist. Four words nobody else would have strung together let alone put him in a Western.

There’s an abundance of sequences to choose from as a highlight, and they often work as standalone sketches, which is a blessing and a curse. Tarantino doesn’t really demonstrate any restraint here. But at least he keeps you on your toes for what to expect. In Schultz’ first bounty demonstration, his manner takes everyone off guard and it makes for a fun, concise and intriguing way to approach an assassination as well as give insights into how this character operates.

Here’s how Tarantino writes it while bearing in mind his protagonist on the sidelines: (from page 16) 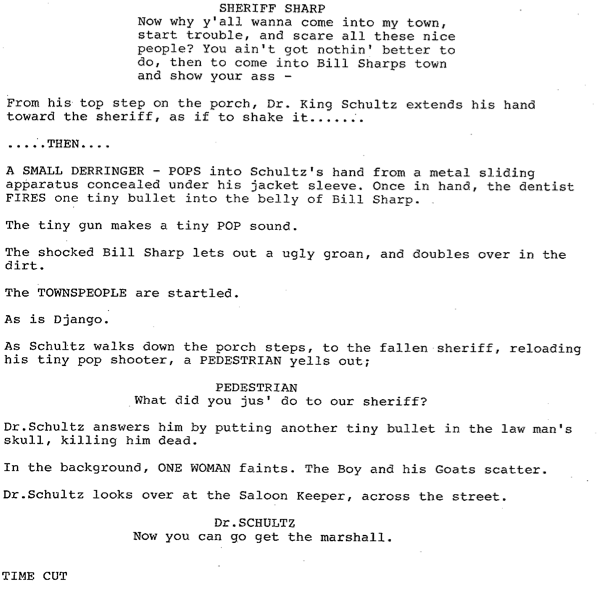 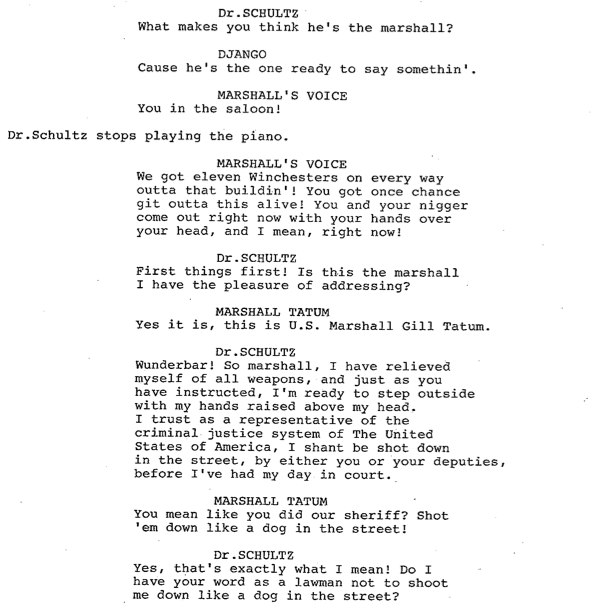 As entertaining as the film may be I do find it overly long-winded, suffering from a few contrivances, and the tension is not as well handled as Inglourious Basterds. It does have its moments though. I’ll admit to being over the moon for Tarantino’s win in a relatively weak year in hindsight. I’m not really an Argo fan, I don’t mind the liberties with history, but I do mind the way it deflates in the third act. I’ll say a flaw now in the script – it doesn’t pay off what it sets up (which would be each individual being tested physically and psychologically, in my opinion). But what I can commend it for its efficient blend.

Great screenplays are deft balancing acts. Argo has comedy and thriller each with individual senses of order and chaos. Though mostly in Affleck’s approach, you’re hardly jarred by the difference between the cinematic scenes in Hollywoodland and the verite scenes at the Canadian Embassy. That’s intuitive screenwriting.

The script’s best moment is in the intercut scenes of the script reading and the hostages. There’s a great juxtaposition between this trivial movie with all the serious repercussions highlighting just how silly this idea was. The humour and thrills collide in an interesting way in this montage. It ramps up the stakes and the urgency by showing, not telling.

Let’s see how it’s written: (from page 49, including the first instance of “Argo fuck yourself” for kicks) 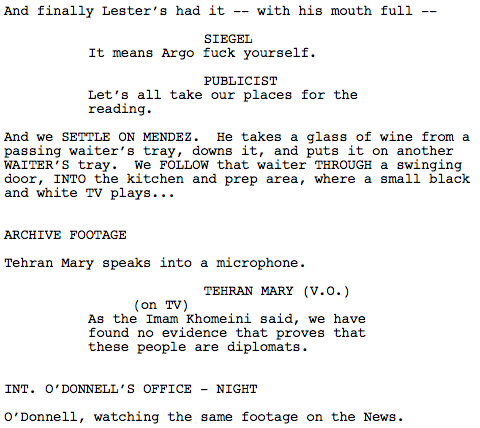 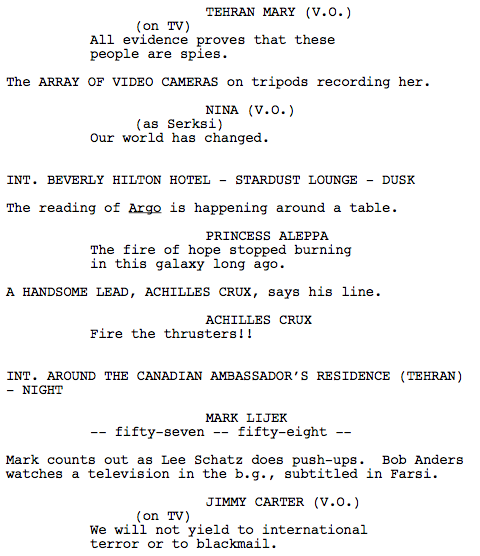 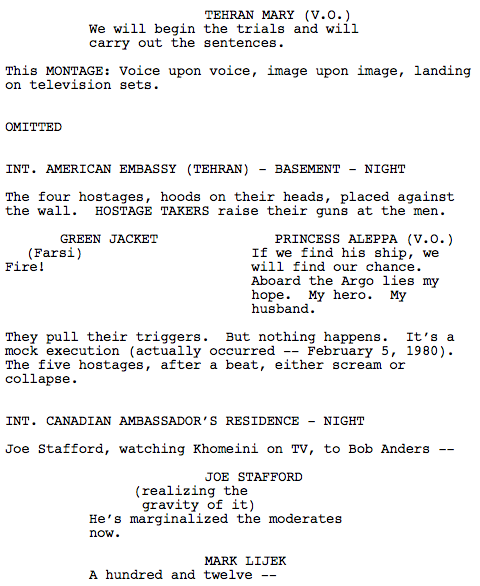 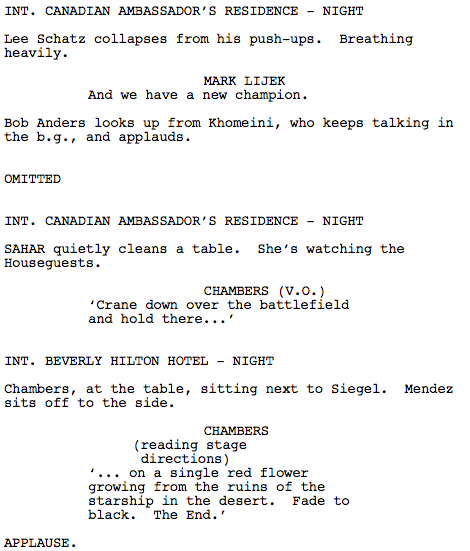 Shame John Goodman’s self-deprecating comments feel too pandering for my tastes because the script otherwise has a good sense of wit, especially from ever-reliable Bryan Cranston.

2012 has a long list of interesting scripts: The Master, Moonrise Kingdom, Silver Linings Playbook, Looper, Lincoln, Wreck-It Ralph, Les Miserables, Beasts of the Southern Wild. It’s tough to choose my favourite between The Master and Moonrise Kingdom, but although the film is very flawed, I’m a sucker for Silver Linings Playbook. It does have a touch of movie magic and a great sense of where to escalate a scene.

Your thoughts on the screenplays of Django Unchained and Argo?

What were your favourite scripts, scenes, or characters of 2012? Post in the comments below!

I’m also a sucker for Silver Linings Playbook. I definitely admit it has its flaws and inherent cliches within its genre, but it succeeds in not being a cheesy rom-com-drama that’s very well-acted and actually quite funny {who wasn’t laughing when the family erupted in roaring cheers after they received an average 6/10 at the dance competition?}, and it never patronizes the audience. I also liked how Russel never backed down from escalating a scene past the emotional comfort point. The escalations didn’t come off as forced melodrama, but rather very raw and real conflicts {partly due to the sensitive… Read more »

I’m glad Quentin won his second Oscar, but he won it for the wrong movie. He should have been awarded it in 2009 for Inglourious Basterds, but at least he gets revenge on war journalist turned movie script scribbler Mark Boal for beating him in 2009 by beating him in 2012. Django never had the tension that Basterds did, was a little overlong, and overall it wasn’t as clever or well-written as Basterds was. Not to mention the final act was a little over-the-top and borderline cartoonish. Still glad he won though, and Django probably was the best script out… Read more »