Welcome to Good Reads, where we look into what makes the screenplay winners Oscar worthy. We’re polishing off the half-decade now with a controversial Best Picture winner and the screenplay that will probably remain the finest of the 2010s. Here’s a list of the other articles written so far if you’d like to catchup: 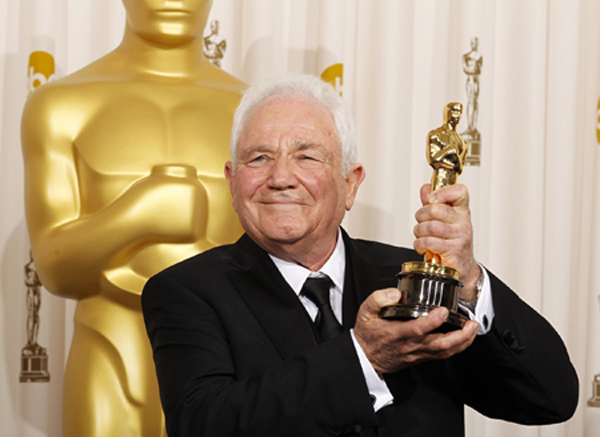 Patience paid off for David Seidler. At 74, he was the oldest screenwriting winner – until the following year when Woody Allen won at age 76 for Midnight In Paris, but Seidler is still the oldest first-time winner in the category. His pre-2010 career is full of TV movies and films with familiar titles but only in how they were marketed. He started work on The King’s Speech in the 1970s but upon the Queen Mother’s request that he were to not make it in her lifetime, he abandoned the project in the early 80s. Sometimes passion projects are fated for success, it just takes a little while. A long time.

Even with all that time poured into it, taken lightly in many ways it does blow hypothetical consequences out of proportion, whereby King George can’t muster passion in his speeches to enthuse the nation thereby threatening Britain’s position in the war. His speech impediment is a trivial one, but we’re all inflicted with trivial problems like this and it finds common ground with its audience on that basis. It’s a contagiously hopeful film in many ways. The undeniable heart of the film is the reluctant relationship between mentor and mentor, Bertie and Lionel.

While the film has its contrivances in their first meeting where their tangy wit stumbles with the pacing and exposition (the whole ‘my castle’ thing comes off especially stuffy) their inevitable bond is eventually earned through their constant conflict. The script is a lesson in how conflict fuels friendships, and in The King’s Speech’s case we often remember it being much sweeter. So how does Lionel use their friction to their mutual benefit? To a King no less. The scene at Westminster Abbey best demonstrates a key turn (from page 71): Liberal use of exclamation marks, David. What more can be said about the genius of The Social Network? I remember first hearing about the project shortly after being underwhelmed by Fincher’s Benjamin Button. I was perplexed, intrigued, and cautious, but hardly optimistic. The term ‘Sorkin’ didn’t mean much to me despite being a fan of Studio 60. But over time, the film’s detail, tone and execution grew on me. Not one for realism, Aaron Sorkin’s vision of computer geeks turned technology entrepreneurs is full of bustling egos, Shakespearean betrayal, and double-take insults.

The pre-courtroom drama (times two) timelines interspliced with an origin story narrative probably spun the heads of Kirk Baxter and Angus Wall in the edit suite. It’s incredibly dense storytelling, and watching Facesmash spread across campus is still exciting sans Trent Reznor and Atticus Ross’ pulsating score. This is familiar territory, we may not all be academics but most of us are on the computers on the internet most of the time. Other films have been clunky while trying, The Social Network set the stage for how it can be done cinematically. Fincher may be a control freak but Sorkin’s command of the page dominates the film.

While it’s best in the broad strokes, looking at success and social dis/connection in the modern age, the big swinging dick of the script is undoubtedly the dialogue. Even if half of it goes over your head the first time you’re still singing the praises for the endless supply of quips. There’s a reason the 120 minute film is a 160 page script. Every line is laboured, polished and sharp as a tak, with a quick-witted response to match. Ny impossible to select a highlight brief enough, lets look at the tail end of the opening scene and how Sorkin punctuates the argument between Mark and Erica to make it sizzle. It’s a real scene-setter (from page 5): I wonder how many times Zuckerberg has amused himself with watching the film. Rooney Mara gets all the best lines in this scene anyway.

Too many good scripts to count for 2010: Another Year, 127 Hours, Scott Pilgrim vs. the World, Toy Story 3, Four Lions, Inception, Black Swan, Blue Valentine. While The Social Network handedly claims the year, it pains me to choose it over Toy Story 3, which is an example of a perfect sequel. The opening sequence is its own little masterpiece. While it may rely a little too heavily on homage, it’s rich with its own context of 15 years worth of adventures. I bawl like a baby every viewing. No shame.

Next week, two relative surprises, The Hurt Locker and Precious.

Your thoughts on the screenplays of The King’s Speech and The Social Network?

What were your favourite scripts, scenes, or characters of 2010? Post in the comments below!